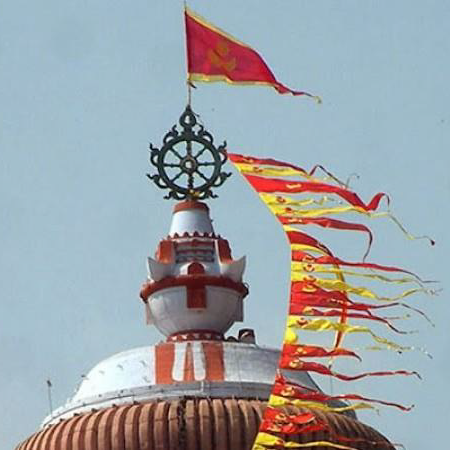 Please accept my blessings. I am in due receipt of your letter dated March 1, 1976 and I have noted the contents with care.

I have marked how they are attracted to our kirtana and prasadam there in Hungary. If they consider our philosophy too revolutionary, there is no necessity to print books immediately. First, the heart must be cleansed by chanting Hare Krishna and taking Krishna prasadam. To take birth in such place is due to impious past so it is not easy for them to immediately accept our philosophy. Just give them chanting and prasadam. You must be very tactful to preach in such places. If you like you can print one record there as you have suggested.

If the young people become very serious, if you find it is detrimental to have them wear dhoti and shave head, that is not necessary. Simply introduce the chanting and prasadam distribution and gradually they will be elevated to being Vaisnava. A Vaisnava is aloof from all material conditions of life, so even under such circumstances a Vaisnava will not feel inconvenienced. Kirtiraja should be returning to preach in Eastern Europe so you can work together to introduce Lord Caitanya's sankirtana movement in this part of the world.

I hope that this meets you in good health.


Morning Walk -- December 27, 1976, Bombay:
Prabhupāda: Because it is important, therefore Kṛṣṇa said, kṛṣi-go-rakṣya. Why go-rakṣya required, you do not require any explanation. Kṛṣṇa said, go-rakṣya, "You must protect." That's all. That is Kṛṣṇa conscious. Because we have no brain why Kṛṣṇa—giving up all other animals — He is giving stress on go. And that is meaning. He never said, animal-rakṣya, paśu-rakṣya, no. Those who want to eat paśu, let them eat nonimportant like hogs and dogs. There are class of men who eat dogs also, hogs also. Or, utmost, goats. But don't touch cow. This is instruction. And modern civilization first of all killed all the cows. And when they are no more available then can you eat other animals. I do not know why our government is now restricting cow slaughter.

Prabhupāda: Yes. But not from the slaughterhouse. Those who are kṣatriyas, they can, they're allowed sometimes to eat meat. It is understood Bhīma, Bhīma also eating sometimes meat. Bhīma. Amongst the Pāṇḍavas, only Bhīma. Not others. So if the kṣatriyas, they want to eat meat, they can be allowed on particular occasions. But they must go to the forest and kill the animal. Not that for meat-eating regular slaughterhouses should be maintained. This is all nonsense, degradation. If you want to eat meat, you go to the forest. And the śūdras, they also sometimes eat meat. Or the caṇḍālas.

Hṛdayānanda: But never the cow.

Room Conversation -- June 29, 1976, New Vrindaban
Prabhupāda: So our business is to stop slaughter. Meat-eating we cannot stop. Certain persons, they must eat. They are fourth-class, and then fifth-class men. There are four classifications—brāhmaṇa, kṣatriya, vaiśya, śūdra and caṇḍāla. Caṇḍālas, they will remain, and they are eating. Let them eat meat. That is the system in India still. It is not that in India nobody's eating meat. The cobbler class, they eat; the caṇḍāla class, they eat.

SB 6.16.42, Translation and Purport: How can a religious system that produces envy of one's self and of others be beneficial for oneself and for them? What is auspicious about following such a system? What is actually to be gained? By causing pain to one's own self due to self-envy and by causing pain to others, one arouses Your anger and practices irreligion.
Any religious system but the process of bhāgavata-dharma-service as an eternal servant of the Supreme Personality of Godhead—is a system of envy of one's own self and of others. For example, there are many systems of religion in which animal sacrifices are recommended. Such animal sacrifices are inauspicious both for the performer and for the animal. Although one is sometimes permitted to sacrifice an animal before the goddess Kālī and eat it instead of purchasing meat from a slaughterhouse, permission to eat meat after a sacrifice in the presence of the goddess Kālī is not the order of the Supreme Personality of Godhead. It is simply a concession for the miserable person who will not give up eating meat. It is meant to restrict his desire for unrestricted meat-eating. Such a religious system is condemned. Therefore Kṛṣṇa says, sarva-dharmān parityajya mām ekaṁ śaraṇaṁ vraja: (BG 18.66) "Give up all other duties and surrender unto Me." That is the last word in religion.

One may argue that the sacrifice of animals is recommended in the Vedas. This recommendation, however, is a restriction. Without Vedic restrictions on the purchase of meat, people will purchase meat from the market, which will be overflooded with meat shops, and slaughterhouses will increase. To restrict this, sometimes the Vedas say that one may eat meat after sacrificing an insignificant animal like a goat before the goddess Kālī. In any case, a system of religion in which animal sacrifices are recommended is inauspicious for those who perform the sacrifices and for the animals. Envious persons who perform ostentatious animal sacrifices are condemned in Bhagavad-gītā (16.17) as follows:

ātma-sambhāvitāḥ stabdhā
dhana-māna-madānvitāḥ
yajante nāma-yajñais te
dambhenāvidhi-pūrvakam
"Self-complacent and always impudent, deluded by wealth and false prestige, they sometimes perform sacrifices in name only without following any rules or regulations." Sometimes animal sacrifices are performed very gorgeously with grand arrangements for worshiping the goddess Kālī, but such festivals, although performed in the name of yajña, are not actually yajña, for yajña means to satisfy the Supreme Personality of Godhead. Therefore it is recommended that in this age specifically, yajñaiḥ saṅkīrtana-prāyair yajanti hi sumedhasaḥ: (SB 11.5.32) those who have good intelligence satisfy the yajña-puruṣa, Viṣṇu, by chanting the Hare Kṛṣṇa mantra. Envious persons, however, are condemned by the Supreme Personality of Godhead as follows:

ahaṅkāraṁ balaṁ darpaṁ
kāmaṁ krodhaṁ ca saṁśritāḥ
mām ātma-para-deheṣu
pradviṣanto 'bhyasūyakāḥ
tān ahaṁ dviṣataḥ krūrān
saṁsāreṣu narādhamān
kṣipāmy ajasram aśubhān
āsurīṣv eva yoniṣu
"Bewildered by false ego, strength, pride, lust and anger, the demon becomes envious of the Supreme Personality of Godhead, who is situated in his own body and in the bodies of others, and blasphemes against the real religion. Those who are envious and mischievous, who are the lowest among men, are cast by Me into the ocean of material existence, into various demoniac species of life." (Bg. 16.18-19) These persons are condemned by the Supreme Personality of Godhead, as indicated by the words tava kopaḥ. A person who commits murder is envious of himself and also the person he has killed, for the result of committing murder is that he will be arrested and hanged. If one transgresses the laws of a man-made government, he may escape being killed by the state, but one cannot escape the laws of God. A killer of any animal must be killed in his next life by the same animal. This is the law of nature. One must follow the instructions of the Supreme Lord: sarva-dharmān parityajya mām ekaṁ śaraṇaṁ vraja (BG 18.66). If one follows any other system of religion, he is subject to punishment by the Supreme Personality of Godhead in many different ways. Therefore if one follows a concocted system of religion, he is envious not only of others but also of himself. Consequently his system of religion is useless.

dharmaḥ svanuṣṭhitaḥ puṁsāṁ
viṣvaksena-kathāsu yaḥ
notpādayed yadi ratiṁ
śrama eva hi kevalam
"Duties (dharma) executed by men, regardless of occupation, are only so much useless labor if they do not provoke attraction for the message of the Supreme Lord." Following a system of religion that does not awaken one's Kṛṣṇa consciousness, or God consciousness, is merely a waste of time and labor.